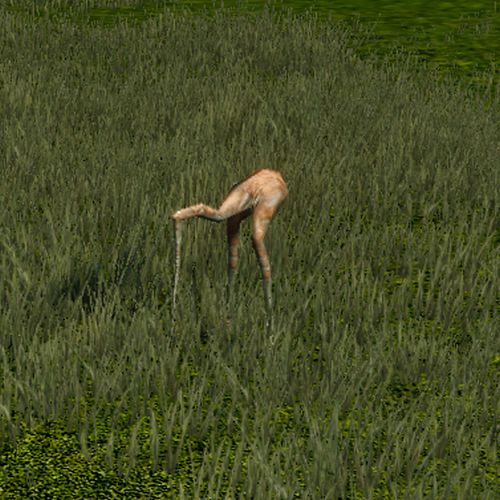 This animal is a very swift runner. It has six eyes, which help to keep it alert to its surroundings, thereby avoiding stalking predators. If it feels threatened it will run away at great speed.

The Creatures section is currently under construction and this process will take some time to complete. The work is being done by volunteers with limited time, so please bear with us while we add the data. If you can provide any information that is currently missing, please post in the thread to let us know.

While this construction period is ongoing, you will be able to access the old Bestiary section which is archived in a sub-forum of the Creatures section. Each mob thread in Creatures contains a link to the relevant Bestiary thread and to the Entropedia page, so if you are looking for information that isn't yet available in the Creatures thread, please use the links provided at the bottom of the first post in the thread.

I used to find those shy creatures at Eos but spawn moved.
Luckily I got after long time this daily bonus mission and I need a good spawn to make it quick.
Any suggestions?

Thank you in advance
A

Winterpark?
sorry but I never heard it before

Just to give a bit of clarification on Fred's post. I found this thread because I just got my first Fuga bonus daily. As of right now there are still enough Fugas to finish the bonus very quickly, but you won't see them immediately when you start seeing the Snables and Berys. You have to continue flying SW a bit. When I killed my tenth Fuga I was right next to the Fortress Invincible area (approximately 85660, 77545). Hope this helps.

So got Fugabarba daily and found this and entropedia out of date.
http://planetcalypso.entropiawiki.com/Info.aspx?chart=Mob&name=Fugabarba
Below is Entropedia coords, or it'll say PCF coords.

[70130, 83690] Atlas Haven TP
NONE (no longer low: dominant)
I remember this waypoint and it had tons of mobs and now its now dead quiet.
South + SW lots of Young-Old Snablesnot Male +Young Shinkiba
East is low spawn of Hiryuu at least provider to old-alpha (didn't bother to check too much)

Not listed on either site [71668, 82484, 132] immediately outside the walls of Atlas Haven
Low: Old to Dominant
Mixed with low spawns of: Fouls, Faucervix, Snarg,

Society
I don't need one