I know Toulan is delayed. Does anyone have updates on any other planets?
D

Cyrene has there's I got [Christmas Treat Bag]

yeah I got this too.

Just got Next Island 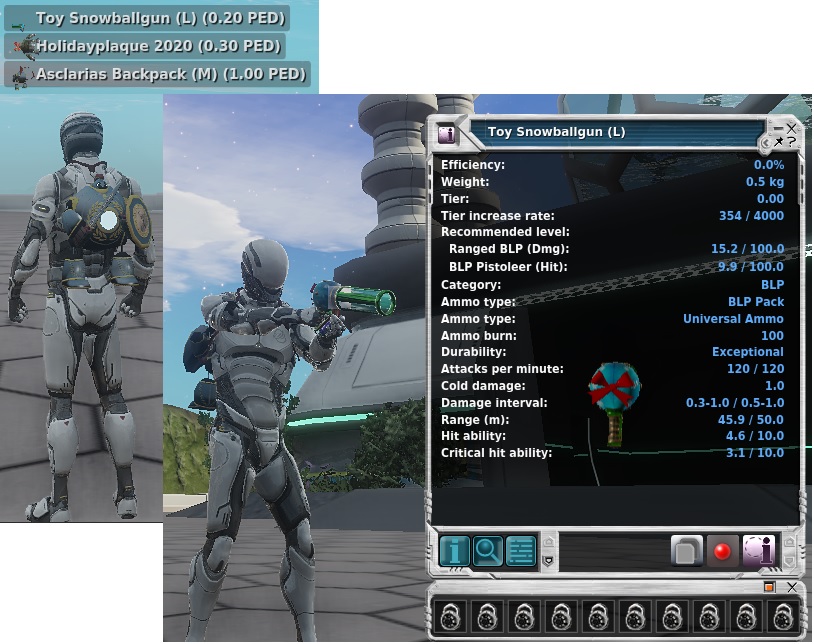 Can you fly to each planet to receive these gifts or do you only get one from which ever planet you are on most?

AckerZ said:
Can you fly to each planet to receive these gifts or do you only get one from which ever planet you are on most?
Click to expand...

You can fly to each planet, and collect gifts

AckerZ said:
Can you fly to each planet to receive these gifts or do you only get one from which ever planet you are on most?
Click to expand...

Kevlie said:
You can fly to each planet, and collect gifts
Click to expand...

also, it depends on your items and history on what you get. Traditionally there was 3 gift packages... one for everyone, one for those that deposited a certain amount over time, and those that own estates... each pp's 3 gift packages differ year to year. Some planets do nothing some seasons, some do a lot. Arkadia and Calypso are usually most generous, but with Toulan under new management, next island under new management, etc. we'll see...


http://www.entropia-library.xyz/space-map/ - SPACE MAP - best map I've seen out there that shows you the 'hunting grounds' etc. There are some paths you can take to avoid all mobs if you plan your trip carefully.

If you are not armed to take on space mobs, my suggestion is to find a 'safe path' and just aim your quad to the edge o fthe map to get past the mob zones... then when you are sure you are past them reaim towards the planet. Just be careful since you will be bumping server's edge and getting that 'deep space' message. If a mob is on your tail when you are bumpting along in the dark out there it can get annoying since the server edge will slow you down a lot. once you are 'behind ghe space spation' so to speak it's relatively safe out in the border near the planets since most mob zones are more towards the center than the sppace stations..

of course, as usual, watch out for pirates from time to time. Don't carry stackables, etc.
Last edited: Dec 25, 2020

OK, just did the gift-grabbing tour. I'll just narrow it who did and did not give:
Calypso - Yes
Cyrene - Yes
Arkadia - No
Next Island - Yes
Toulan - No
Rocktropia - No
C

Toulan gifts will be available after upcoming patch. There was an error and it is delayed for that reason. Exact date? I dont know, we will see, but the FREE gifts will be there, as soon as possible

Kind of weird that the toy snowball gun is L and has max of 1 Ped tt value but you only get one with 20 pec tt value.

Cod4 said:
Toulan gifts will be available after upcoming patch. There was an error and it is delayed for that reason. Exact date? I dont know, we will see, but the FREE gifts will be there, as soon as possible
Click to expand...

My theory is that they'll use St. Patrick's day to do the Toulan gift release since he put in a date but never revealed the actual date that was given to Mindark for the rlease to happen... Just seems like that'd be the date he'd choose based on the fact that Monria does a St. Patricks day thing every year... but we'll see?

I was over there on Toulan for a few weeks after Christmas to explore the new stuff, but left when the population started getting too heavy after everyone else got the same idea. I may go back some day, but am working on upping level on some Next Island pets to level 7 at the moment before leaving Next Island.

The new taming daily for tabtab is a swell way to up levels if you are a tamer. Also, the new butt joint blueprint that only uses harvested items as ingredient is nice as they put a LOT of trees to harves over there on Toulan. In theory you could just harvest and craft butt joints there until you run out of peds forever now... but don't expect much markup since there's now hundreds of other avatars doing so as well.

Sadly, there are NO trees to harves on Next Island anywhere. oops forgot the other 3... went back for more.

Wonder if this will be a yearly thing where there's 5 gifts here or if it'll only be back to normal next year?

p.s. if you come to visit talk to some npcs. Looks like Monria/Toulan team knows how to do that more than the auto drop in inventory as soon as you enter atmosphere thing that you usually get with xmas on other planets. 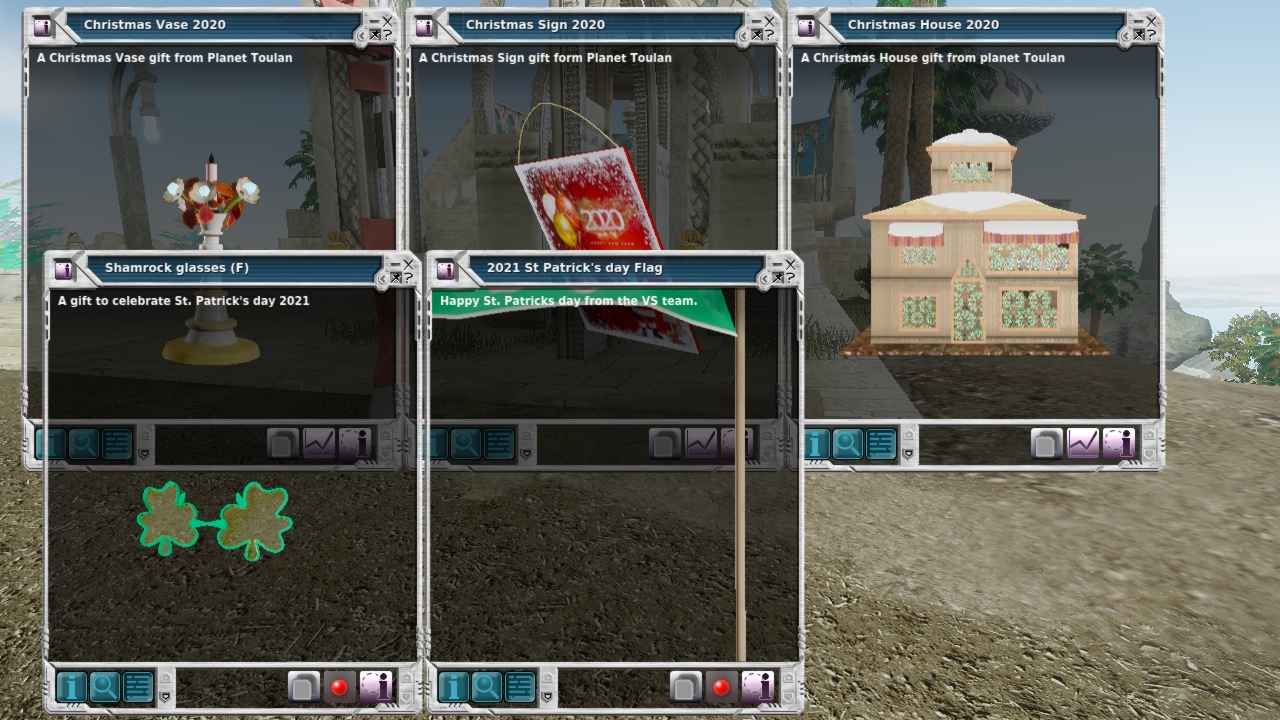 Tabtab seem to be best mob to hunt for this since the loot table for them is not loaded with a lot of other stuff. Similar low level mobs nearby do have crackers too but you have to kill about 15 of them to get a cracker and only about 2 tabtab to get a cracker.... wish they'd up the spawn since you have a lot of running to get from tab tab to tabtab. Makes it hard to hunt or tame there if there's more than 1 avatar in the area.
Last edited: Dec 11, 2021
S 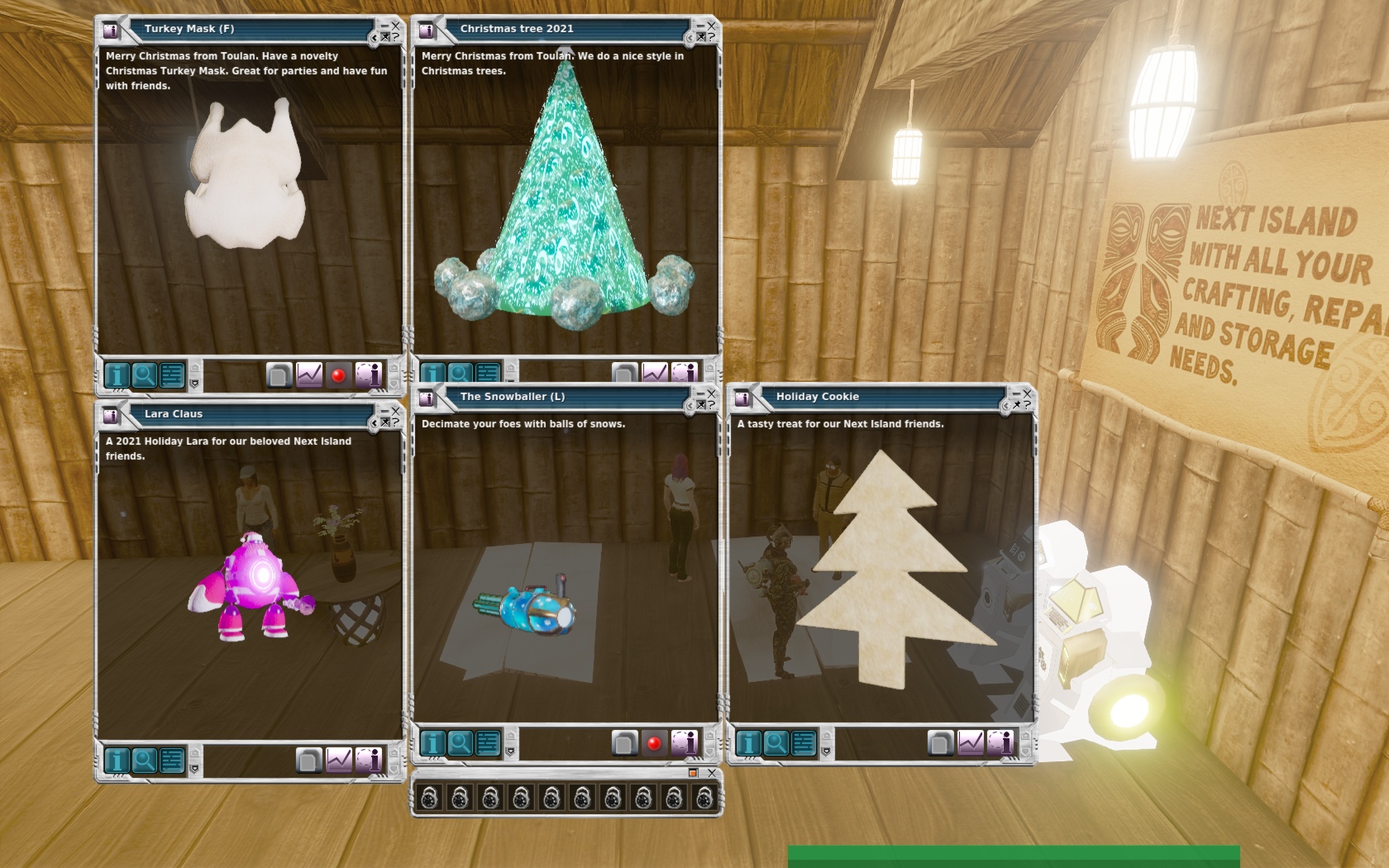 Ark seems dry. Maybe they'll release tomorrow or on the 25th. I always seem to remember they wait til the very last second... Doubt Rocktropia has anything so pointless to spend time heading up there?

(two tamed asclarius are heading back to my shop when I get up that way eventually)
Last edited: Dec 24, 2021
B 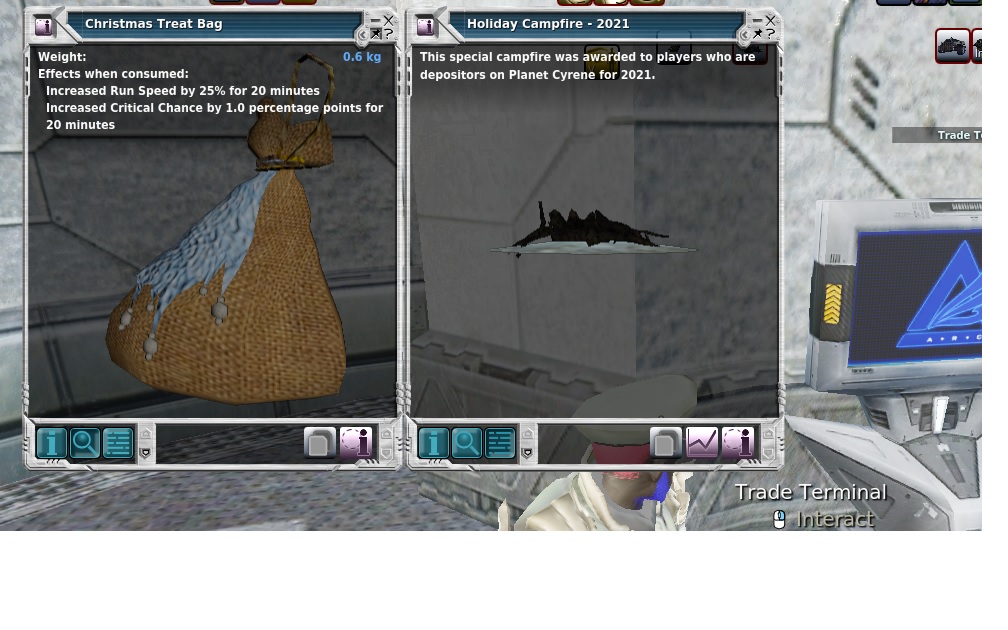 Any news on ark?

lol... i was taking Cyrene Tokens for buy a Campfire in Cyrene for my house... and one day later, Campfire was a gift!!! 500Cyrene Tokens less 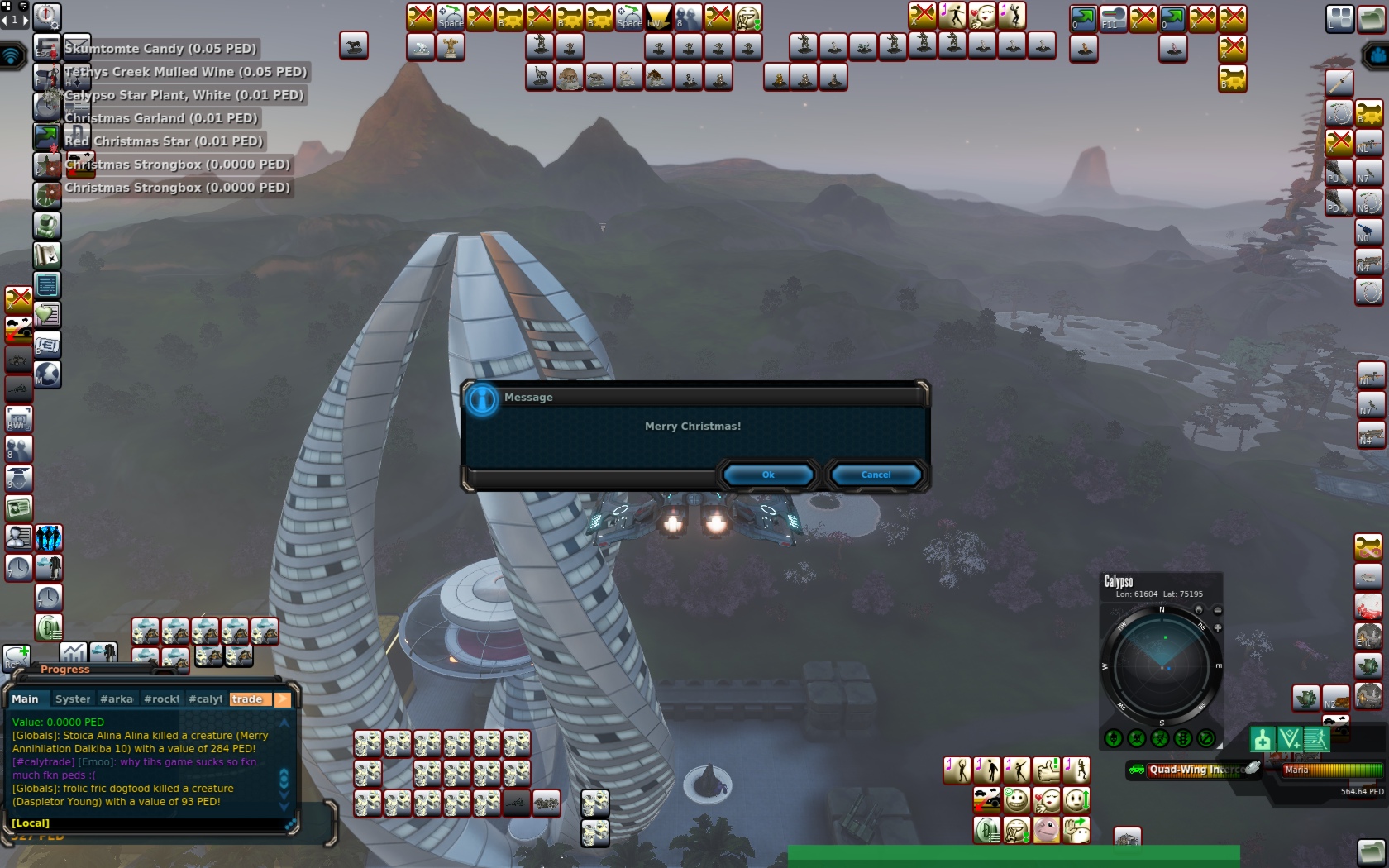