I think this is way at the bottom of the list. We can only keep up with bumping the thread Mining needs a little BUMP !!
B

was surprised to hear that was not a hof.
R

Now it's easier to calculate what adding Mining excavator enhancers does not do anything. Great job MA! 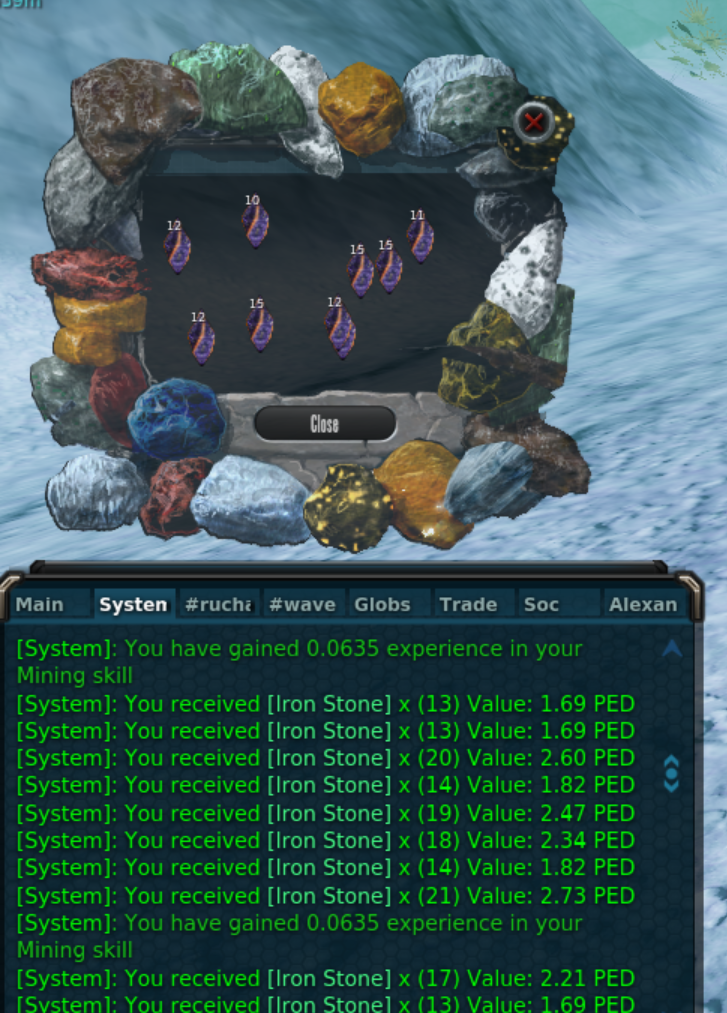 I was less hopeful about a small update including this, but since we can have things like the chat log being fixed, maybe we can get this fixed before UE5.

I do wonder if this is maybe tied to the Yog exploit and when they tamped down on that, it scuttled something in the excavator system? Could be there's something in the inner workings that doesn't make this such a simple fix, but still, a simple note saying this is a known issue would go a long ways instead of silence on MA's side for so long.
R

One thing I noticed with the new update for my original post though. Apparently on high-value TT resources (only tested on enmatter so far like Azur, Acid Root, etc.), my excavator only pulls around 15-20 resources at a time for those rather than the 80-90 you see with low-value things like Lyst or Crude. That one entirely slipped under my radar before.

Looks like there's something else in the excavator dynamics going on rather than just a straight number of items per efficiency. That said, that doesn't change that the enhancers don't work, just that you might expect a different amount of resources per pull for some resources. If you're sticking to a single resource for the stats like I was though, that would eliminate confounding from that.
R

Awareness bump. Maybe time to test it out again to see if they snuck a fix in, but I'll be honest I'm not too optimistic right now.
B

So what's the fastest test? Find minimal or maximall pull on enhanced vs unenhanced on same mineral? It should be easy to review even in chat.

It's easy to review in chat now, amount pulled varies roughly by TT value of the individual resources themselves too. It'll be most detectable on a 0.01TT item like Crude Oil. You need to work with averages though rather than just min/max of a few pulls. Even just two enhancers on mine and the a difference should have been easily detectable.
B

Just a quick sample but it shows the same over time .....


They work
my tracker actually compares these kinds of stats for all items used over different setups
Last edited: Dec 1, 2021

forgo said:
Just a quick sample but it shows the same over time .....


They work
my tracker actually compares these kinds of stats for all items used over different setups
Click to expand...

Those data are showing no difference though. It's a bit smaller of a sample size, so you're going to get much more random values pushing the early averages. It's just as likely next time that the enhanced excavator would have a slightly smaller amount per pull next time. Like with the OP, you need to run those through a statistical test like a t-test. The p-value for yours is p = 0.3547, so definitely not in statistically significant difference territory.

Also in the long run, assuming you are pulling from the same TT-value resource at least to standardize things, you should be expecting closer to .50 ped per pull if you are using two enhancers at 10% increase per enhancer.

people reported initially what some extractors work with enhancers.

You need to drop values of last pull

jupiajo said:
You need to drop values of last pull
Click to expand...

I double checked with that, and even in that case, the p-value is still not significant. Unequal sample sizes also make the stats a little wonky for comparisons too.

Checking with folks that have done some testing themselves, it looks like this is still not fixed. On an improved, you're almost never going to break 1 ped per pull on oil, etc., so if the enhancers were working with a 10% increase, a good rule of thumb is that you should be seeing some 1 ped+ pulls at least.
Last edited: Dec 6, 2021

This really needs to be addressed.