Pains me to do this, but it's became apparent I don't have an eco bone in my body, and I need to free up some peds for a community project. I don't utilise these fabulous armours as much as I should and it would be a shame for them to gather dust! I have kept them until now, as these are the armours I have high hopes in looking spectacular in the new engine.

The first set I have for sale, took real blood sweat and tears, and for all intents and purposes I would keep as a memento to the work, camaraderie and lore that helped to create them. Every ascension piece has a story to tell. For me I cant/wont do long or non interactive streaming, shot myself in the foot! But makes this set more special to me
However its a fabulous armour that deserves a bit more than being in my storage, The Ascension full F set is up for sale, to all reasonable offers. 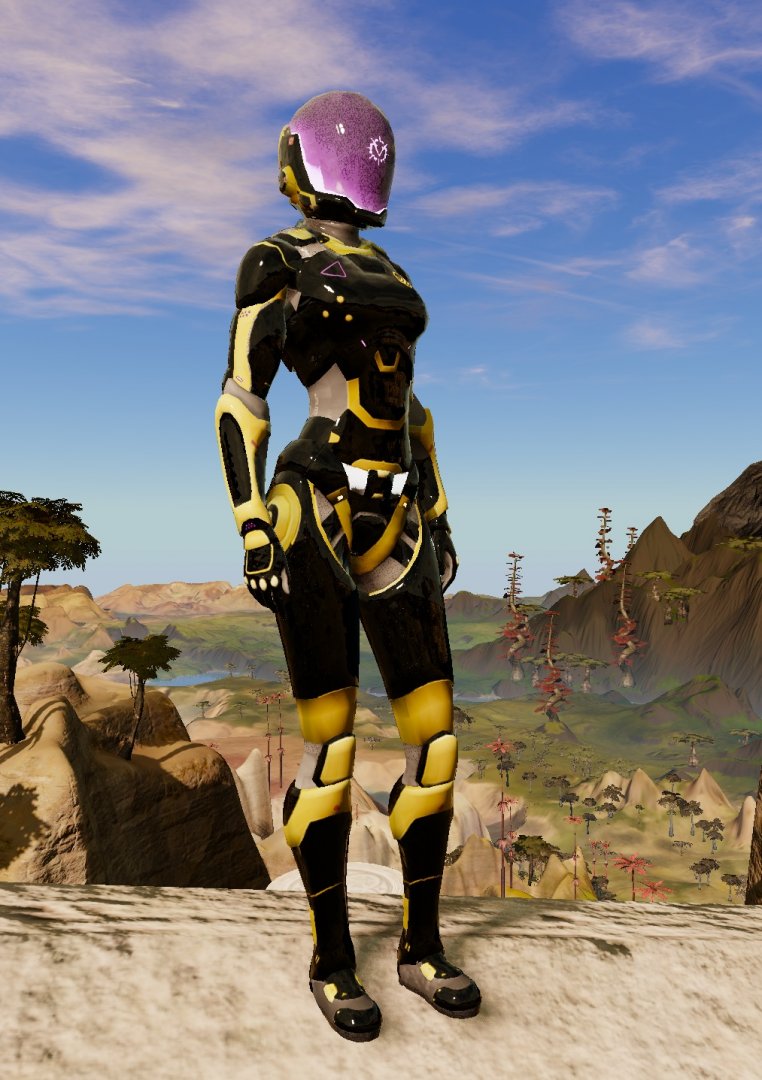 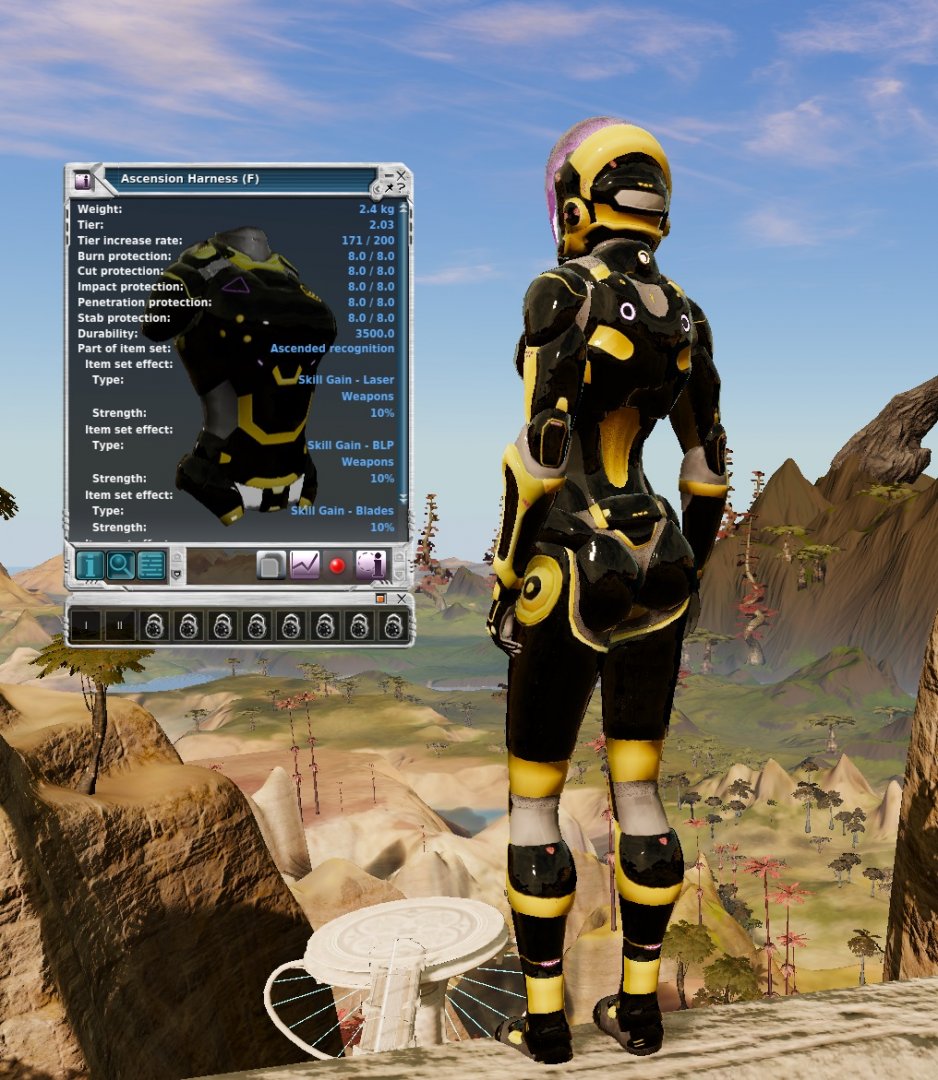 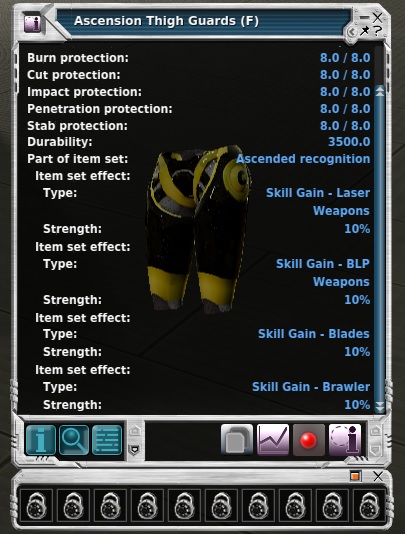 Secondly I have a hard fought mixed set of Gorgon. All parts I have looted myself or purchased comps to upgrade. As there has been very little sales history at these tiers, I have attached a few extra photos at lower tiers to maybe help in offers. 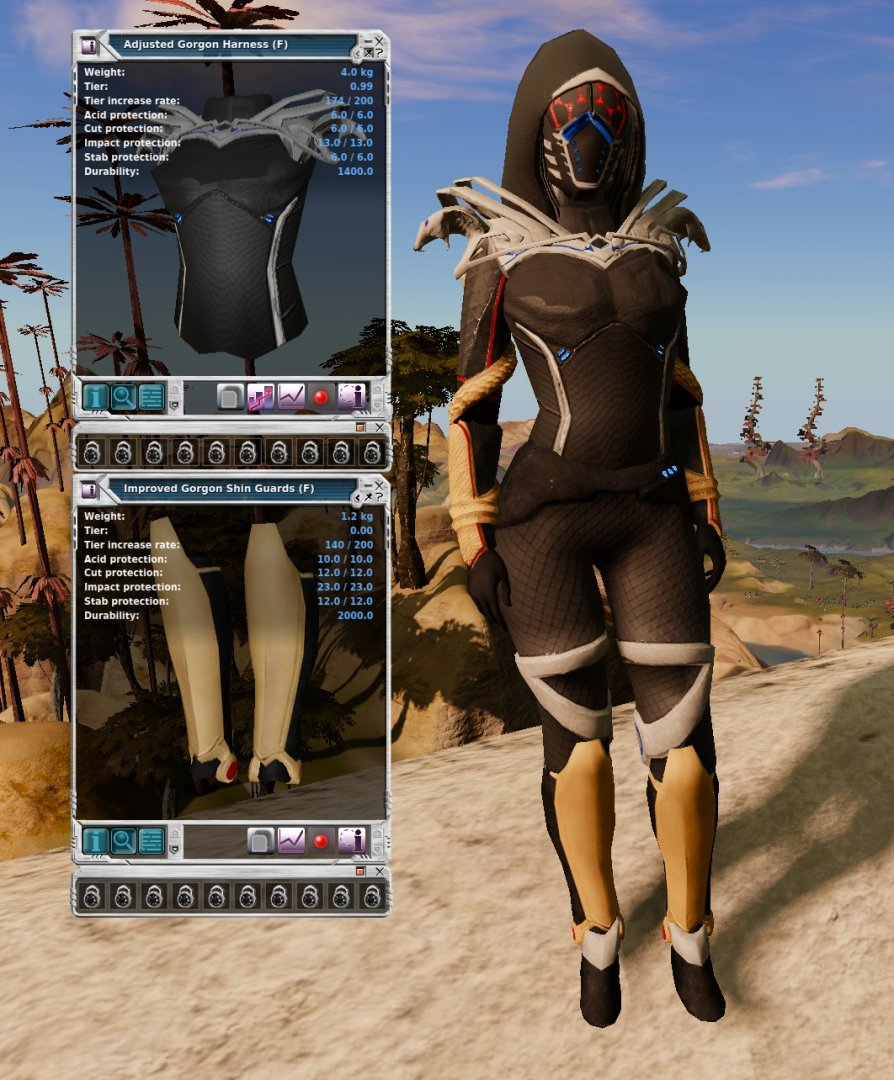 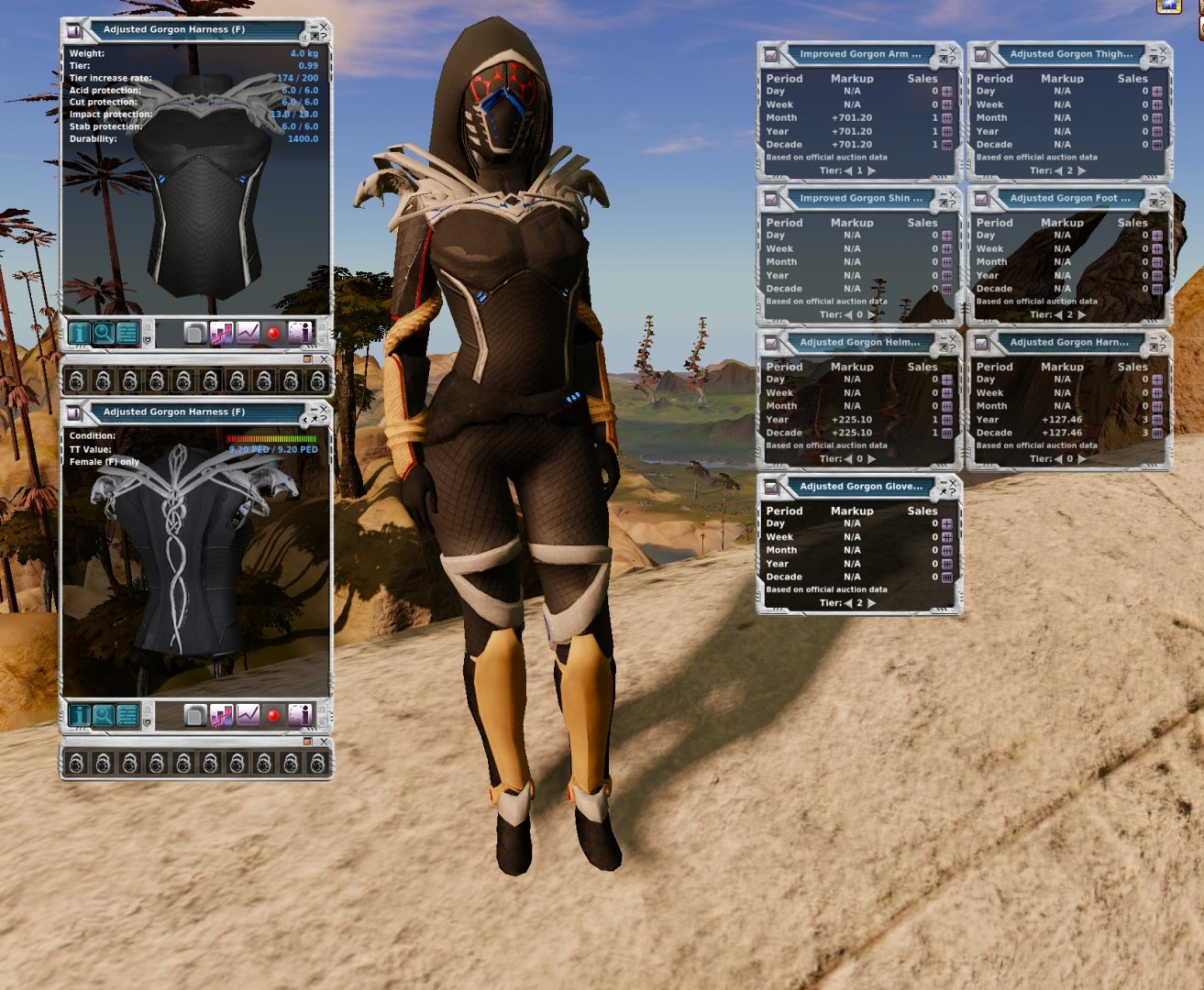 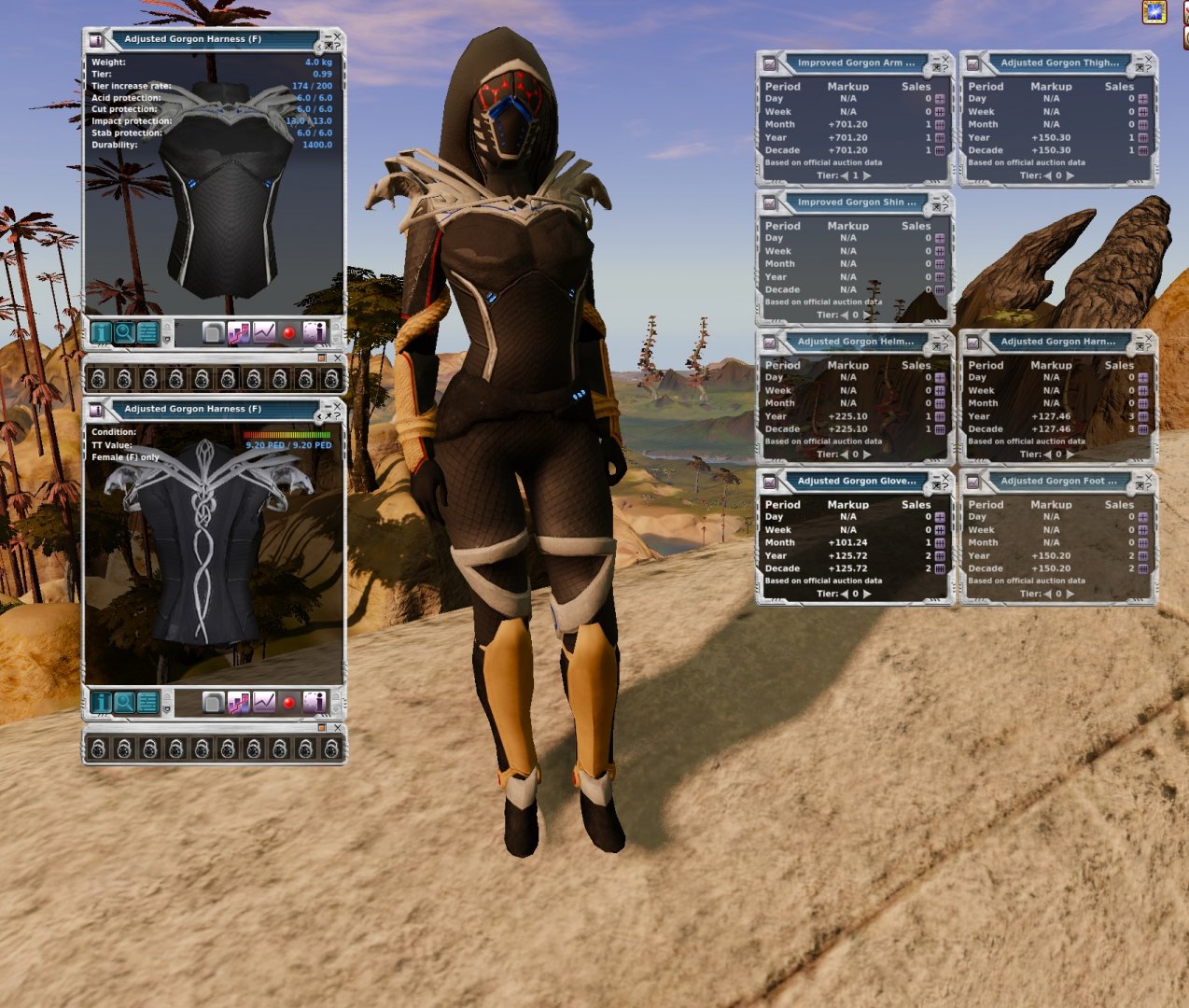 Of course happy to send links, stats, or any other information you need

No rush to sell either set, but I have my eyes on something which will be very useful in community events so would like to free up some peds to support this.

For the Ascension there has been apparently sets sell previously for 10k, there are sets for sale atm around this price. My set has a few parts tiered, but its not expensive to tier upgrade.

Any hints on the new project?

Doraim said:
Any hints on the new project?
Click to expand...

It is something that I should hopefully be able to use to support several different levels of player interaction, which means a lot to me Either en mass events, smaller instances or helping "levelling up" sooner for those who couldn't before

In the light of transparency I would be more than happy to discuss intentions if it were to be influential in the sales, just let me know
(+ gz on 100 posts!

“But the fact is, dreams catch us with our armor off.”​


(I read a sale thread here a while back where the author filled the bumps with quotes instead, it was a nice change from the norm )
Last edited: Feb 21, 2022

“Never forget what you are, for surely the world will not. Make it your strength. Then it can never be your weakness. Armour yourself in it, and it will never be used to hurt you.”​

“Put on some armor. Just remember what's armor and what's you, so when it's time to take it off, you can.”
― Brent Weeks, The Blinding Knife

We are nothing, but small moments. All happening within, a bigger moment.
―Tees Maar Khan

“The weak can never forgive. Forgiveness is the attribute of the strong.”
― Mahatma Gandhi, All Men are Brothers: Autobiographical Reflections

*update with indication of prices*

Bump for fancy armor and fancy quotes. Check my signature

Suspicion is a heavy armour and with its weight it impedes more than it protects.

“All armor has its weaknesses. That doesn't mean you should stop wearing it.”
― Elizabeth Carlton, Chivalry's Code

"What you leave behind is not what is engraved in stone monuments, but what is woven into the lives of others."​

“Remember that the happiest people are not those getting more, but those giving more.”
― H. Jackson Brown Jr.

Price updated, I don't want to keep the seller of the item (I am hoping for to use in the events) hanging about too long, so happy to reduce a bit to try and get the sales done

“I'll be more enthusiastic about encouraging thinking outside the box when there's evidence of any thinking going on inside it.”
― Terry Pratchett

Price updated, its really at the lowest I'd be wanting to take for them, otherwise I will need to fund the new project another way

The Gorgon set remains on sale for anyone who stumbles over this thread, but no great rush
D

Any hints on what it is now?

Doraim said:
Any hints on what it is now?
Click to expand...

Oh sorry I just realise I never replied! It was for a resurrection chip

Gorgon still for sale as individual here, or bulk over here - https://www.planetcalypsoforum.com/forum/index.php?threads/broken-armour-d.288363/

“War." Gorgon spits the word. "That is what they call it to give the illusion of honor and law. It is chaos. Madness and blood and the hunger to win. It has always been thus and shall always be so.”
― Libba Bray, The Sweet Far Thing

What did the ascension set sell for?

DrGirlfriend said:
What did the ascension set sell for?
Click to expand...

Quite honestly I never kept track. Both myself and the buyer were happy and that was that!

I do appreciate sales prices for longevity sake, but I also appreciate discretion. I'll never be a pro seller