EU Hunter Tools, track your loot and calculate your profit in real time and some extra stats

Hey, I decided to make my own app and share it with the community.

Join the Discord to get the link and learn more about the tool (instructions, F.A.Q, updates...) we are 80+ members. Discord Server

The app do not use external connections or interacts with the game directly. Only uses the chat log file to get the information. Contacted the EU support team and they confirmed that there is not any problem with an app made this way. 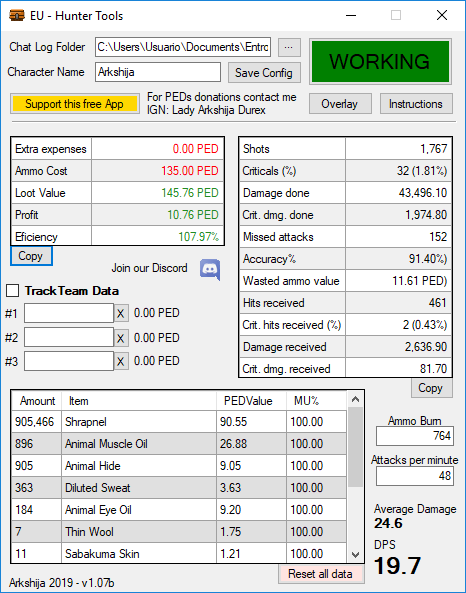 Anyone used it? whats ur experience?

So you have to be in a team?
A

Xen said:
So you have to be in a team?
Click to expand...

Yes, tools that reads the chat.log file needs you to be in a team. This is the only way to see your looted items on the chat and let the app read it.
I

i saw it on twitch, GrannyKillzALot have used it
very interesting tool

i.cromme said:
i saw it on twitch, GrannyKillzALot have used it
very interesting tool
Click to expand...

Nope not me bud

It's a good tool. But buggy.
Doesn't appear to work with melee weapons (missed shots doesn't count).
He should an option to add decay of your tool not just ammo burn. When i tested newest version with rifle it wasn't possible to add gun decay on "extra expenses".

The developer is busy in rl he said so won't be any new updates for a while. It's really a shame if he doesn't open source it. It may die like all the rest previous good tracking software over the years.
K

Hey, I was recently introduced to you app through Calypso Companion. I have been working on setting up a tracker of my own as well and yours seems closer than the Entropia Life tracker to what I had in mind for setting up a App.

I all ready have a Excel spreadsheet with all the items from EntropiaWiki sourced, an excel spreadsheet with all the mobs and their maturities and stats for every mob from every planet, an excel spreadsheet with all the mine-able resources and what they are refined to, a spreadsheet with all craftable blueprints and the blueprints are source on their spreadsheets with the materials needed to craft each blueprint (this and more I am wanting to utilize on a broader system), A spreadsheet of all the weapons and armors as well as amps and scopes and their stats(this also is meant to be used in numerous implementation sources), a spreadsheet of all the mining stuff and their stats,. Generally the utilization on a broader system is determining value based on frequency and Popular demand, implementing environmental behavior social integration(Shops, Estates, Events"Parties or festivals"), and of course, like a APP like the Entropia Tycoon app or whatever, except accurate and constantly up to date. I have other ideas too, I am sure I am just drawing a blank right now.
I actually have A LOT, but I am curious how you got the app setup? I have a general idea of how to get it going, but I have a lot going on and my mind is usually in 10 different places at once so I take things on as it comes to me. I have numerous other spreadsheets and maps of stuff, all planned to be used for different things as well as utilizing eachother to source information.

To give you an idea of what I had in mind and I would love to work directly with you on making it happen though I am also interested in seeing what you have done from with ground level.
Statistics from each individual kill,
A spreadsheet that records each kill and the loot that was in that kill loot, a other record that records total loot. This would be used to create a percentage meter. The percent of each loot type that you looted, and then a record that shows the percent likelihood that a mob is going to drop a specific item. (It is kind of like a Luck indicator)
... If there could be a way to track exactly "What mob and the maturity of the mob" That was being fought and looted at the time of loot, that would be amazing.
Also, Something like LBML, if there could be something to take a picture of the Radar, or live feed the radar and whenever something is looted, it takes a picture of the Coordinates, and can indicate what mobs in certain Regions are dropping specific loot(As I am also creating a updated interactive Mobs Map for Maturities by mobs or something similar but could also be easily identified by maturity drops by region possibly)
I made a new Mining Map that I am still working on instead of giving general regions where mining finds are being made, it gives exact locations on the map, how far underground it was, what tool was used, and what the mining find was and how big it was.
But I have been focusing on the Hunting Tracker more than the Mining tracker.
If you are interested in helping me establishing the framework system, I would be very grateful. And even if you don't help me, I will do what I can to help you while trying to overdo the all ready existing system in place on my own. >_<
Last edited: Jul 12, 2019
K

I sent EntropiaLife a long and detailed description for a request of a live chart feed data system and all the records they have from the past years of the Tracker being active so that I could start doing a Loot Weather News on Twitch and Youtube through my Society News Report system I am wanting to start, Part of the News report would include *Loot Weather News*
I am hoping they like the idea and that I can implement the system along with all my other projects by January 2020, I was last informed by EntropiaLife that the person would "pass this along to the one who handles the data base."
It has been a long while but I will message them a few months before January worst come to worse. But I think it would be great to have my system up and running and that it could be utilized much more efficiently. Though it is kind of similar to what I requested from EntropiaLife.
But either way, that is another thing I am trying to accomplish, looking for loot activity/ patterns throughout the days/weeks/months/years, and making predictions on loot like a weather news channel.
-Yesterdays Loot and what it compared to our prediction of what the loot would be.
-Current Loot and what it compared to what our prediction of what the loot would be today.
-And predictions of loot for the next 3-5 days.
There might have been a few other things added to the Support Contact I sent them about the idea. That this is the general idea.
But yeah, I would really like to finish my app maintain it into all that I am wanting to do. Both works good too, whichever people refer to use, two works better than one >_<

I've been trying to search on google for download link for the latest version of this app with no luck.

The discord link in the OP is broken. Anyone got link for the download or can invite again to discord server?

Bumping this again, since Entropia Life tracker app doesn't track anymore since we moved to entropia wiki. I would be very happy if someone has this app still and can upload it somewhere so it can be available again.

I added it here: https://github.com/atomicstorm-hca/EUHunterTools

For any collaboration on the EUMats file. I will link from ELoot later.

Doest it work with melee now ? I mean was something changed, since im still melee atm

XxNeverSickXX said:
Doest it work with melee now ? I mean was something changed, since im still melee atm
Click to expand...

Does the Discord channel exist still? The link has expired.
You must log in or register to reply here.
Share:
Link
Menu
Log in
Register
Top