Here you can find the detail's of the new April event as the March calendar event is finished. 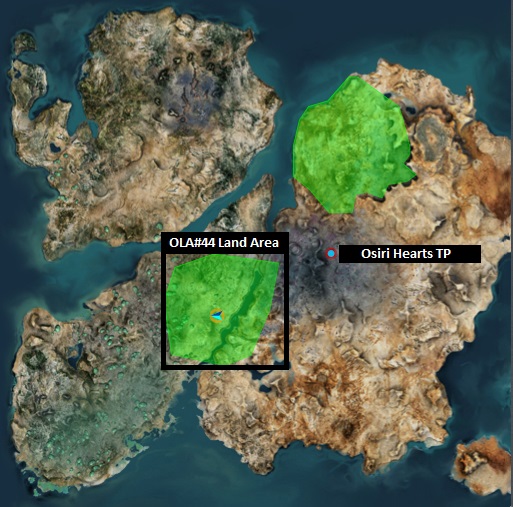 At the beginning of the April event, most of the spawn are Gatherer, Scout and Adult 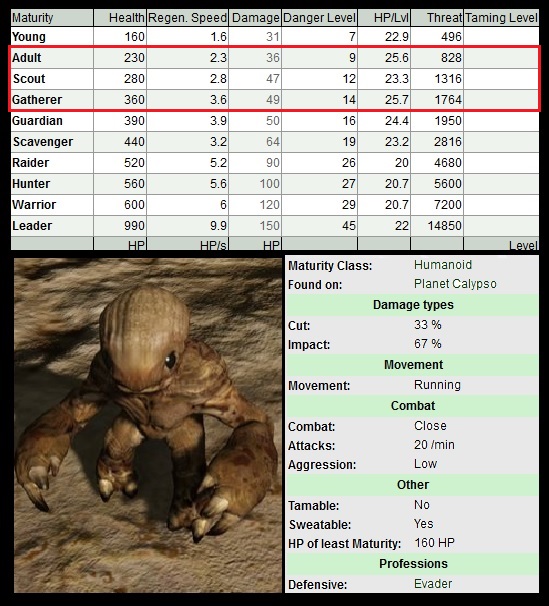 Event rule's of the Bounties of April


How to win prize's:

2, Do hunting (solo or team) or mining activity

4, I will check if your global is matching the criteria of any active bounty

The available Bounties can be found in the 3rd post

The 4 base Mining bounties (Devil, Lumis, Garcen, Megan) are permanent, but the reward's for them can be increased - decreased based on mining activity.
1 time mining bounties can be added any time during the event.

There is a limit of 1 per every permanent bounties per day.
If there are 2 for the same ore-enmatter in one day, the winner is the 1 with the bigger value.
If they are the same value, the miner's split the reward.
The 1 time bounties will be won by the first Miner matching the criteria's.

1 global can complete only 1 bounty, if your global is lucky enough to match the criteria's of 2 or more bounties, you win the one with the biggest prize.

Because this time i have no more information than other's, im too alloweed to participate.

Not needed for individual's, i will track your globals in Entropia Life.
Registration needed for team's, with TEAM NAME and Avatar name who eligible to receive the prize's.
Team's from previsious event automatically registered again.

You can register your Team in this thread, or ingame by MAIL or PM to Hego Damask II
You can start your team hunt right after the registration was sent, not need to wait for my confirmation, but please be sure your team name not match with an existing registration.
All registered Team names can be found in 3rd post.


Only globals can be verified on Entropia Tracker eligible to win prize's.


Feel free to ask if you have any question or point out something i may missed and can be important.​
Last edited: Apr 3, 2021 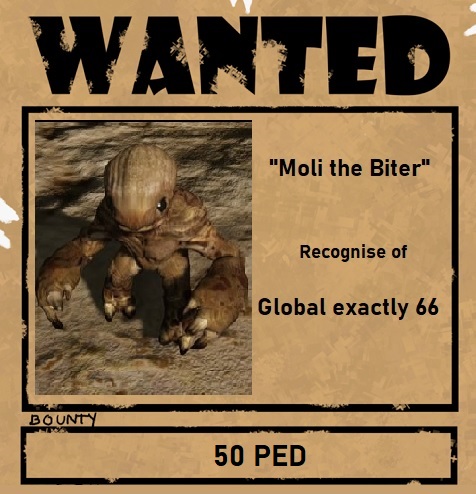 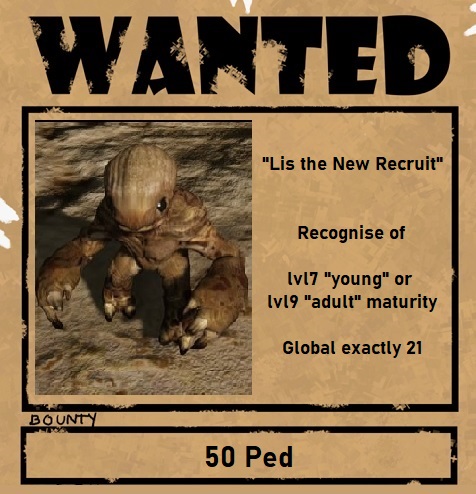 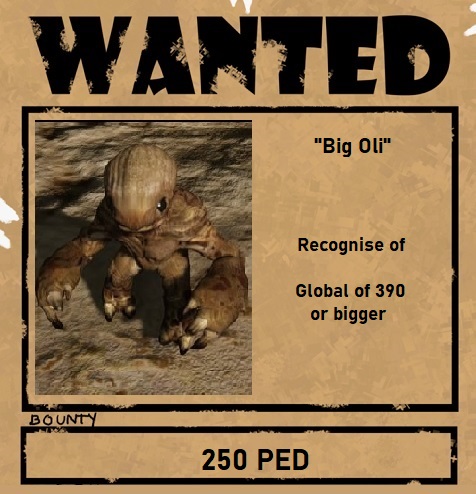 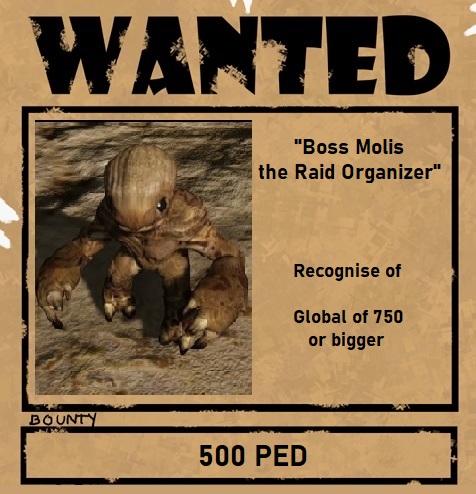 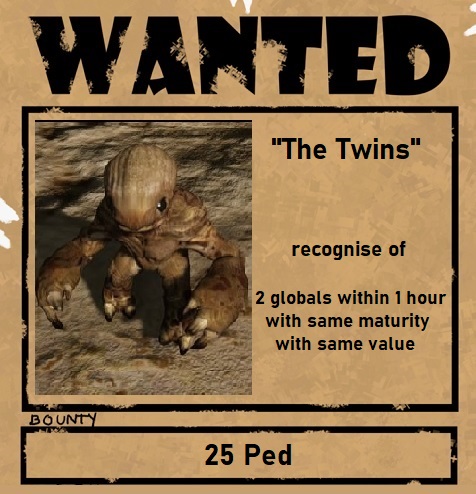 This is the best promotion I've seen. It actually feels like a quest. This is amazing.

Thank you, i had fun making the wanted sign's, looking forward to see how many of them will be captured.

Interesting! Was looking to hunt some molisk for sometime now, definitely gonna visit them later

[Event update]: levi ron Athan claimed a bounty (Lisk the Scout) with a value of 25 ped at Ola#44! 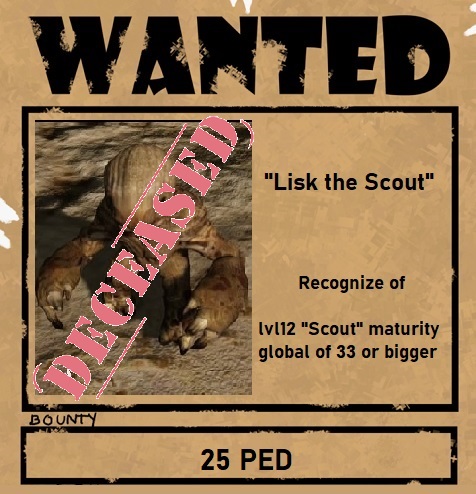 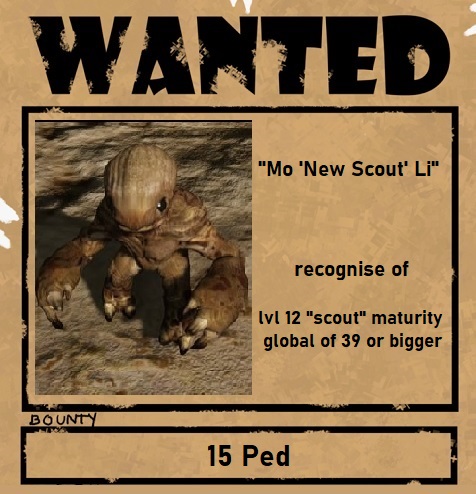 New bounties can be claimed only by globals made after their addition.

FYI, "The Twins" may looks hard at first, but it would be completed 3 times during the last 13 Molisk globals in OLA#44. 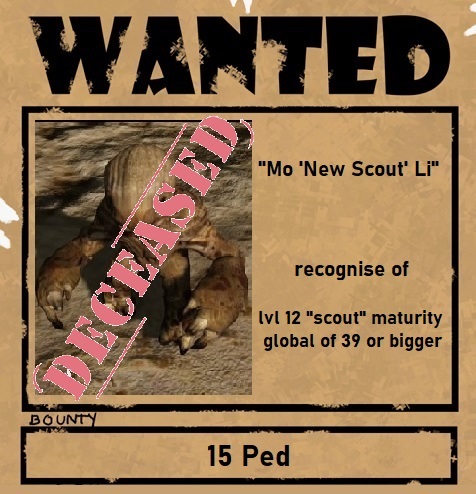 [Event update]: Liquid Vaper Juice claimed a bounty (nameless one) with a value of 10 ped at Ola#44!

The new molisk head of scout was killed by Liquid Vaper Juice even before the new wanted poster was printed officially.
The new bounty would have been created the same way as the 2nd was, scout maturity, with value equal or bigger than killing value of the last one +1, but again a bit lowered reward.
His global would have been eligible to claim it, so i decided to reward it to him.

Had to change on the method of creating new Scout maturity bounties, as the previsious killing value +1 would be very hard to complete.
Instead, the value was lowered minimaly compared to first scout value, 32 instead of original 33, because global must end with the number 2, so 32 also can win, not just 42, 52, 62 etc.